Pasta Puttanesca. So To Speak.

In the world of umami, pasta puttanesca is a real workhorse. For pennies already used to stock your pantry, you can make a sauce that repeatedly smacks your brain’s pleasure centers with an entire ingredient list worth of intensely umami-rich flavors. Tomatoes? Check. Garlic? Check. Anchovies? Capers? Olives? Hot pepper? Parmesan? Check, check, checkity check. It’s enough to make a perfectly demure food enthusiast break quite a sweat. That’s not one of the prevailing theories of why this dish is named after ladies of the night, but let’s be honest here. It ought to be. 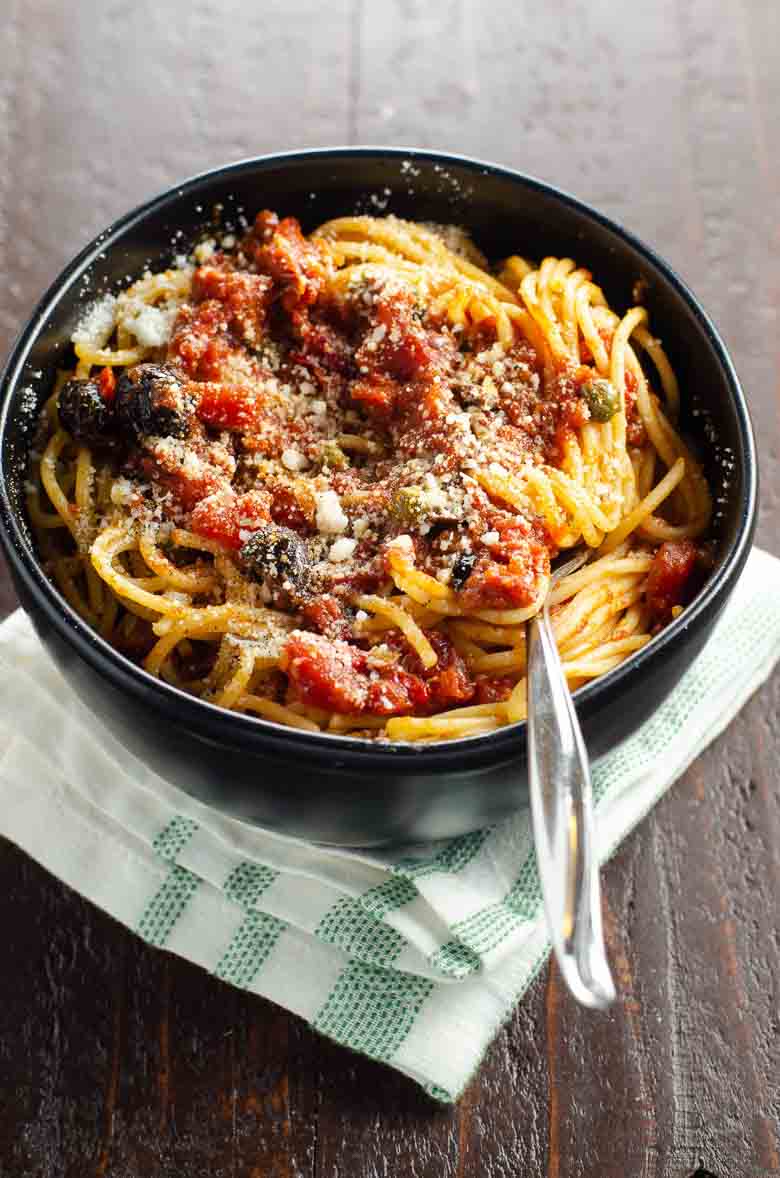 A lifelong love of puttanesca

With its pungency and unforgiving savoriness, this is the kind of sauce that most American children of the early 1980s would have squirmed under the table to get away from. Not me, not by a long shot. Back then, I didn’t know my umami from my puttanesca—who did, really?—but I knew there was something different about me. Like many who would later come out of the pantry, I suspected I should keep my preferences to myself until safely graduating from high school and moving to a large, coastal metropolitan area. (Although even back then, I used to eat spaghetti slathered with extra-virgin olive oil and grated parmesan as an after-school snack, so anyone paying enough attention could have guessed what was in the cards.)

Umami may be an ancient, naturally occurring phenomenon, but until recently, there was no vocabulary to talk about our strong, sometimes frightening feelings for it. No hotline to call after making a snack of a bowl of capers. No known reason for secretly finishing soups with a dash of fish sauce. And frankly, when people did start to talk about umami more openly, their lists of high-umami foods and scientific analyses of glutamates didn’t really offer anything my shopping list hadn’t covered for years. Still, it’s been nice to have increasing company, in life and on this site.

Umami in the spotlight

Now, though, the times they are a-changin’. People are calling umami the bacon of 2010. It’s been the subject of Top Chef and mushroom-sponsored press junkets, and it graces the names of numerous unrelated restaurants. All of which, as far as I can tell, means umami has hit the big time.

It’s kind of exciting, right? But it also seems like a pretty sizeable challenge, to take part in the popular rise of umami, and to make a defined contribution. For the past year or so, for various reasons, I’ve been mulling over how to take this site to a more useful, more directed level (without getting overly serious, of course). And at the risk of coming off as a…how do you say…media puttanesca, I’ve been thinking that it’s high time to formalize this site’s relationship with umami, to bring to the foreground the philosophy behind the recipes and the way of life that gave this site its name in the first place. Over the next few months, that’s what I plan to do. Starting with the puttanesca, which is about as umamified as it gets.

The Dreamcatcher (A Blanco Tequila Cocktail)