It doesn’t get much easier than a sheet pan dinner. Roasted salmon with asparagus and crispy potatoes works for a weeknight or a dinner party. 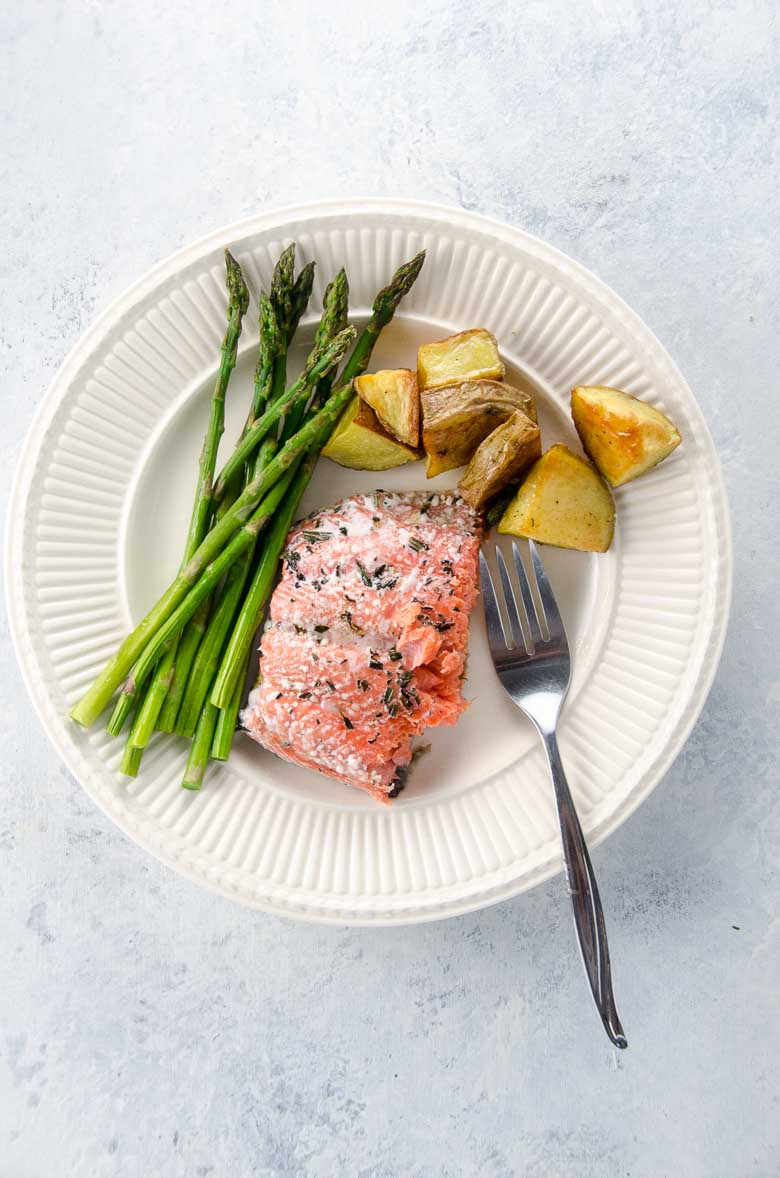 If you prefer your asparagus browned and crispy in spots like it gets when traditionally roasted, cook it in a single, spread-out layer on a separate sheet pan, tossed with olive oil.

Sheet pan dinners are great when sanity is at a premium

You guys, I woke up this morning and realized with some amusement that I’m basically the Trump voter of Super Bowl fans. (Yes, not ALL Tump voters, I know.)

Since Cope is from New England, I’m happy with the result of this contest where the jerks who won are reviled by a huge portion of the country. I don’t usually care about football, but when “my team” swooped in at the last minute for an unexpected victory, I was pumped.

And when it comes to football, I am not only uninformed and largely uninterested in critical thinking — I’m also prone to smug self-satisfaction for knowing the smallest of facts, and I like to be loud about it. “Girls, that’s a touchdown because the BALL crossed the PLANE!” (Nods head, pumps fist while everyone rolls their eyes.)

I wonder if this will give me some new perspective on the election.

But maybe I won’t hold my breath.

Anyway. Now that football season is over and I’m back in more familiar territory, here’s something I do know a thing or two about: dinner.

We’re more of a dinner-in-a-bowl family than a meat-and-potatoes family, but sometimes fish and two veg on a sheet pan is just what the doctor ordered.

Roasted salmon with crispy potatoes and asparagus that’s magically steamed to crisp-tender all on one pan, showered with fresh herbs and lemon juice, could not be easier to make. It’s perfect for a weeknight but also presents beautifully enough to serve straight from the oven at a dinner party.

As I mention in the recipe, if you prefer your asparagus browned and crispy in spots like it gets when traditionally roasted, cook it in a single, spread-out layer on a separate sheet pan, tossed with olive oil. It’ll still a sheet-pan dinner, I promise.

If you own any herb salts, this is a great place to use them. I used this one. It's not necessary, but it definitely doesn't hurt.

What to eat right now: Cooking smart, happy, and safe at home

How to Make a Frittata + The Best Frittata Recipes

Place the vinegar, oil, sugar, salt, and a few grinds of pepper in a large bowl and whisk to combine.

Slice the cucumbers into thin 1/8-inch-thick rounds. Place them in the bowl, add the chives, and toss to combine. Cover and refrigerate for at least 30 minutes or overnight to allow the flavors to meld. Taste and season with salt and pepper as needed before serving.

1. Whisk together the first 6 ingredients in a large bowl.

2. Spread a rimmed (18×13-inch) half sheet pan with the tablespoon of olive oil.

3. Dunk the salmon in the miso glaze and arrange along one edge of the baking sheet.

4. Next, toss the asparagus in the glaze and arrange in one even layer in another corner of the baking sheet.

5. Finally, toss the bok choy with the remaining glaze and arrange in a pile in the open space on the baking sheet (don’t worry about piling it up a little—it will help them steam and cook through).

6. Roast in the oven for 12 to 15 minutes, or until the fish is firm to the touch (if you’d like a little more color on the salmon, broil it for 2 minutes at this point).

7. Remove from the oven, garnish with sliced scallions and sesame seeds, and serve.