Recipes » Homemade pickles are the least of it.

Homemade pickles were an adventure for us many years ago (way back in 2009!) when I wrote this story. We don't make them often, but I remember this day, spent with special friends, so well and so fondly.

These homemade pickles can well, but you can also skip the hot water bath and make refrigerator pickles. Just use them within a few weeks.

Some of my favorite neighbors

Some of my favorite neighbors are people we’ve never met. I don’t know their names or really understand which house is theirs among the many whose tiny urban backyards we can see from our bedroom windows. If I passed these folks on the sidewalk, I might recognize their stooping postures or shuffling gaits, but I wouldn’t know their faces. Still, we aren’t strangers.

Every year as summer is just about threatening to slip away quietly into fall, when maybe we’ve started to turn our own attention toward the first day of school and take a few tentative steps back into the rushing rhythms of the productive life, an arresting sound greets us of a morning. It’s the hollow scream of cheap aluminum pots scraping against concrete, accompanied by percussive bursts of Italian-American chatter. Then, like sandpaper, box upon thick cardboard box filled with plum tomatoes being dragged out to the grassless yard. For two days, morning till night, the work of putting up those tomatoes in gleaming glass quart jars is the only work in the world. It gets louder, rowdier as the hours wear on, fueled by the jugs of homemade wine that will be the work of a later fall day.

In years past, we would steal shy glances out the bedroom windows, drinking in the romance of that distant lifestyle brought close only by population density. In some vague sense we paid homage to the shifting seasons and were comforted by the certainty of that storied process arriving every August. But then we marched back onto our trains, into our offices, and existed in a world apart from that life.

It nourished us, and didn't kill us, to boot

Last year about this time, we had our own first go at canning tomatoes. With a weeks-old baby and an awful lot of apprehension about government-sanctioned safety practices, we canned like fugitives in the middle of the night. We crushed, we food-milled, we funneled. We had our share of fun, but then we meticulously sanitized jar mouths and lidded them with sterilized tongs. We followed the letter of the law and, unfortunately, some of the spirit too. On top of it all we felt a little like kids playing house, in funny old-fashioned clothes from the back of mom’s closet and too-big shoes. Even so, night after winter night, we reveled in our canning-enabled spaghetti dinners and homemade pizzas, which nourished us in ways we hadn’t known before—and didn’t kill us, to boot.

In the year since then, the resurgence of home canning in this country has been nothing short of astounding. Canning is the subject of articles, websites, revolutions and puns galore. We weren’t ready to dive head-first into canning party mode this year like all those organized revolutionaries out there, but we did invite a few friends to pickle, play and share a drink with. Sure, there were a number of unplanned trips to the store for forgotten ingredients (oh, is there lots of salt in pickles?), a few pint-sized “helpers” underfoot at inopportune moments—but also the heady, soulful aromas of toasted pickling spices, the deliciously satisfying clicks of our jars sealing as they cooled, and the season’s first crisp breeze blowing through the kitchen windows. This time, we acidified and processed carefully, but we didn’t obsess. We are learning to make this thing our own—part of the real, messy lives we lead from inside these windows. Something we’ll be able to do for years, until our backs stoop and our gaits shuffle. It’s us canning now, and we’re pickle-faced with gladness. Won’t you join us?

1. Prepare a boiling water canner. (Don’t be intimidated by this—you’re pretty much just filling your biggest pot halfway with water, putting your cookie-cooling rack in the bottom, and turning on the stove—but do have a look at the link if you’ve never canned before.

2. Combine the water, vinegars and salt in a medium pot and bring the brine to a boil.

3. Meanwhile, place one tablespoon of pickling spice and two garlic cloves in each jar. Pack the sliced or speared cucumbers tightly into the jars.

4. As soon as the brine is boiling, ladle it into the jars, leaving half an inch of headspace on top. Place the lids and rings on the jars and tighten.

5. Place the jars in the canner and process for 10 minutes from the time the water is boiling. At the end of the ten minutes, remove the jars from the water and set aside to cool for 24 hours. Then remove the rings and check the seal on each jar (scroll down to the video here for guidance). Stored in a cool, dry place, the pickles will last for a year. 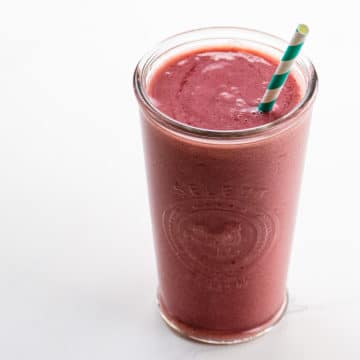 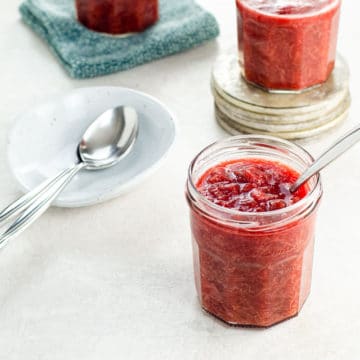 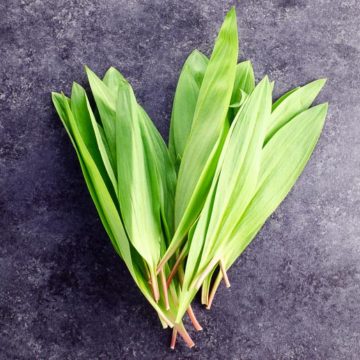 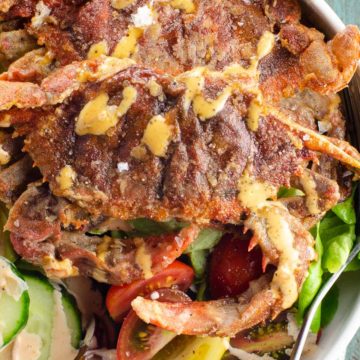